I wrote recently about Apple’s strategy of building a platform around iTunes — a wireless multimedia home network that not only links together all your PCs and Macs and television/stereo systems using Apple TV, but also extends out to your car and to all your iPod and iPhone devices (see “The Mothers of Invention at Apple“). 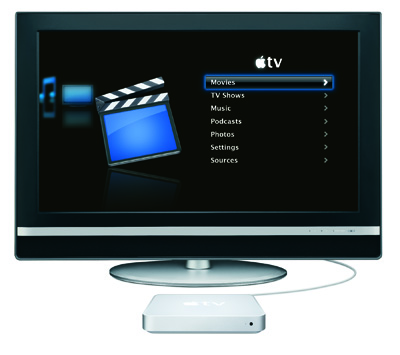 This is no pipe dream. Apple TV, shipping as of March 20, is a hardware node of this software platform — you synchronize it to your iTunes library, like an iPod. But the Apple TV box is capable of much more than its current features, which means Apple can extend the feature set pretty easily through updates to the onboard software. A clue that the Apple TV will someday sport digital video recording (DVR) functions has surfaced. In “Are There Plans For Digital Video Recorder Capabilities on Apple TV?” Carl Howe (Blackfriars Communications) submits that new Automator actions shipped as part of the Apple TV software include New Audio Capture, New Video Capture, Start Capture, Pause Capture, and Stop Capture. Automator is a system for automating workflows in Mac OS X.

The Apple TV hardware is not much different than a low-end laptop computer, and it runs a slimmed version of Mac OS X (for a peek inside, see AppleInsider’s coverage). Even though its USB port is “for diagnostics only” or something like that, Ozy from the AwkwardTV project has found a way to boot the Apple TV from an external USB drive attached to it, without opening the Apple TV case or removing the internal hard disk. Meanwhile, higher-capacity replacement internal drives are already available (see IResQ). The box has also been hacked to play xvid and WMV files, if you take a screwdriver to it and alter the contents of the internal hard drive. Joost (still in Beta testing) can run on Apple TV, according to the JoostTeam blog. Once Joost goes live, people can subscribe to unlimited TV shows.

Video-on-demand (VOD) operators must view Apple TV as a threat (see “How Apple TV Will Impact Operators” by Ian Fogg in Jupiter Research Analyst Weblogs), as Apple TV can provide on-demand HDTV content, as soon as the iTunes store begins stocking HDTV titles. Apple TV works with PCs and Macs transparently, taking advantage of whatever broadband connection you have; this gives Apple TV an edge over traditional VOD services that require additional broadband infrastructure. Competing products, such as the XBox 360, rely on Windows Media Center, and have very limited cross-platform capability.

Wildly expensive at $300, the Apple TV is nevertheless a consumer’s delight. Setting up the Apple TV is a breeze once you get the appropriate cables, which unfortunately are sold separately, adding about $40 to the price. See “Apple TV: An In-depth Review” by ars technica, and “MacRumors Review: Apple TV” by longofest for excellent reviews. Besides the fact that Apple TV is a smokin’ hot product, it’s also hot — about 110 degrees Farenheit at first, and even hotter when playing video (see “Apple TV is…hot!” by Erica Sadun).