Question: What segment of the market has $600 to spend on a smart phone but hasn’t ever bought an iPod or any other product from Apple?

Answer: Corporate executives and managers, account executives, small business owners, and professionals — just about all of whom use Microsoft Windows and software. (The rest of the population that can afford one — the younger generation, consumers, and early adopters — all had iPods before the advent of the iPhone, and many are Mac users.) 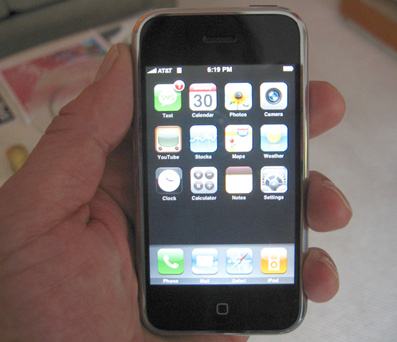 Now think about the survey that found that three of 10 Apple iPhone buyers were first-time Apple customers, and 40% had never before bought an iPod. Those people are all Microsoft customers (or, perhaps, former Microsoft customers). This explains why Microsoft is worried, and why the Gartner analysts that adhere to Microsoft’s way of thinking took the first propaganda shot against the iPhone, calling it unfit for business due to lack of security measures.

Microsoft has sold an estimated four million cellphones running Windows Mobile in 2006 (up from two million in 2005). Apple’s stated goal of 10 million by the end of this year is likely to be surpassed — iPhone sales are well ahead of expectations. That puts Apple in the lead in the smart-phone industry, usurping Microsoft. Apple has blindsided the Redmond giant twice: first with the iPod, and now with the iPhone. In each case Apple has taken market share from Microsoft as its customers defect to Macs (or at least to iTunes over Windows Media Player) and now to iPhones.

As for the Gartner scare, it is conveniently vague and easily refuted. It turns out that the iPhone isn’t any more risky than a BlackBerry or Treo. iPhones can connect to Microsoft Exchange servers, so there is no need to support Blackberry or Good Mobile Messaging servers (which are mostly used as middleware for connecting with Exchange) — a deficiency Gartner cited that is pure misinformation. As for the argument that the iPhone is not supported by major mobile device management suites and mobile-security suites, the analysts conveniently forget that the iPhone is designed for Web 2.0 services, and most business software packages can do the simplest Web 2.0 things such as posting to the Web or sending email.

The iPhone’s security could even be better than other smart phones on the market due to the lack of a software developer kit (SDK). Developers may not like it, but Apple is forcing early adopters to consider using Web 2.0 technology exclusively, which shifts the burden of security to the servers and keeps strange software from doing unexpected things on an iPhone. The device is under intense scrutiny by hackers, but those who want to gain financially from malware will probably stick with infecting Symbian OS-enabled phones which represent about 50% of the world market.

Microsoft has lots to worry about and can’t point fingers at iPhone security while living in the glass house of Windows Mobile. The list of new iPhone widgets and applications is growing exponentially and the buzz will last through the rest of the year. I expect major improvements to occur this year and be available by download directly to the device. I see the iPhone as a platform despite the fact that this first version is not quite complete. With all of its workings and interface in software, the design can be easily improved with downloaded updates. With adherence to standards in video, email, WiFi, and Web 2.0 technologies, the iPhone is the first truly smart phone that can change the phone industry and take considerable market share and influence away from Microsoft.

P.S. Check out my first impressions of the iPhone and accumulated links to reviews and news in “Shut Up and Play Your iPhone, Volume 2” on my blog, iTimes.