Have you looked up from your iPhone long enough to notice how the world has changed? 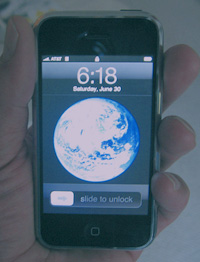 iPhone sales are well ahead of expectations. More rumors are swirling about a wide-screen, multi-touch iPod in August (using Wintek touchscreen panels), with more memory and integrated Wi-Fi, and even with the capability to share data with other iPods and iPhones in the immediate vicinity wirelessly (as well as yet another rumor of a Yellow Submarine iPod loaded with Beatles tracks). Analysts are struggling with predictions of an “iPhone nano” vs. additional 3G capability by the end of this year. All this buzz is fueling an unprecedented increase in Apple’s stock price.

And it seems all well deserved, because, surveys tell us, people love their iPhones. Apple has extended its reach — three of 10 buyers were first-time Apple customers, and 40% had never before bought an iPod.

Of course the iPhone lacks important features and is already in dire need of improvement. Longer battery life is high on everyone’s list, but check out “25 things wrong with the iPhone” in the Apple iPhone Review. I would add to this list the inability to run Google Docs, which I use to write this blog — which means I can’t write a blog entry on my iPhone unless I use the post-by-email feature of WordPress. The iPhone version of Safari doesn’t support Java on the client side, but it does support Ajax, which is widely used now for Web 2.0 development. It also doesn’t support Flash (QuickTime is fine for movies but doesn’t provide the interactive features of Flash). My “blidgets” (blog widgets) on my blogs don’t appear on the iPhone display. But there are developers who would argue that Safari has one of the best canvas implementations of any browser — allowing you to draw arbitrary images using JavaScript and obviating the need for Flash and Java.

While these camps argue, the list of new iPhone widgets and applications is growing exponentially (I’m checking out the MuniTime Web service with transit info for San Francisco, and considering buying the iPhoneDrive application to copy files to an from my iPhone). Enterprising bloggers and reporters are already tearing apart their iPhones and discovering secret test codes. I expect major improvements to occur this year and be available by download directly to the device. Gripes aside, I still see the iPhone as a platform despite the fact that this first version is not quite complete. 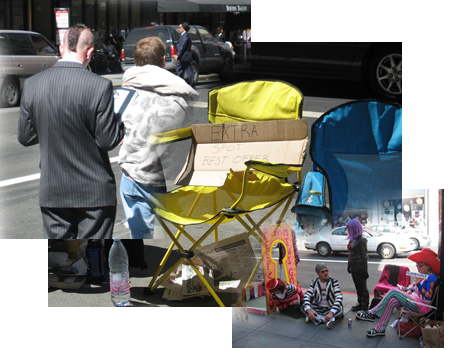 In line at the Apple Store in San Francisco

It’s hard not to like something you waited in line for — in my case, six hours at the San Francisco Apple Store. Several enterprising individuals and at least one disreputable one were selling their seats, but no one was buying. The Apple Store processed us quickly and we were off into the night beaming with pride, oblivious to the fact that folks were showing up at 11 p.m. and getting their iPhones without having to wait in line. We even stayed up most of the night hoping that the automatic activation would finish (the servers were overloaded). But it was the adventure itself that was rewarding — meeting people in line, sharing food and good humor, spotting each other for coffee and bio breaks. We deserved our iPhones and we all sincerely want them to be all that they can be. Apple has pushed marketing to a new benchmark, but so what? As Randy Newman sang about L.A., “We love it!”.