↓
Home Menu ↓
Skip to primary content
Skip to secondary content
Home→Adobe→Apple and Adobe: What Would Mr. Natural Say?
I have read that Steve Jobs’ explanation for not supporting Flash was a “scathing attack on Adobe.” No, it wasn’t. Go back and read it. Jobs was polite, informative, and substantive. He explains Apple’s motivations, specifies where he feels that Flash falls short, and suggests an alternative for Adobe.
They write that Jobs “slammed Flash as unsuitable” and called it “closed and proprietary” and so forth. Well, many quieter, less obtrusive spokespeople — mostly developers and some ex-Adobe employees that were quoted at the very bottom of these stories — agree with Jobs about Flash.
I have also read that “Apple may change iPhone SDK to avoid antitrust case” — portrayed as a rumor circulated by “insiders.” Wishful thinking, perhaps, for Adobe and other vendors, but there is really is no antitrust case, is there? 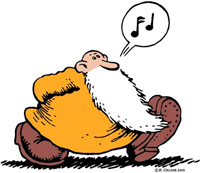 The press consider this to be a fight between Apple and Adobe, and that Apple “abused its position” — as if Apple held a monopoly on smartphone technologies. Apple doesn’t have a monopoly, it simply has the lion’s share of attention for what is undoubtedly the most innovative set of mobile devices ever produced.
It is all merely a war of words, most of which are coming from the press and bloggers who are not just vying for readers but are inventing these wars and blowing them out of proportion to get mass numbers of eyeballs — at least for a few seconds.
As R. Crumb‘s Mr. Natural would say, “Don’t mean shee-it.”
I read that a basic iPhone app might cost $75,000 to build on Flash, and only a few thousand dollars more to convert it to work on Android or other mobile platforms — but with the new restrictions, a developer must spend another $75,000 to build the basic iPhone app from the ground up for a non-Apple platform.
Excuse me? Is this a requirement of Apple’s business plan — that the company must make it easier for developers to port native iPhone apps to other platforms? Who writes these reports?
Besides, do developers have to reinvent the app’s concept, its logic, and all of its data and content? No, they have to convert (or rewrite) its source code to Objective C, but its concept, logic, data, and content could be the same. What’s truly different is the user interface and OS. The problem is that Apple’s OS provides so much of the “flash” (forgive the pun) of the iPhone’s and iPad’s user interfaces that these developers either have to reinvent what Apple provides, or find substitutes in the APIs for Android and other platforms, to do the same things on another platform. And that’s not Apple’s problem to solve — it is Google’s, Adobe’s, and other vendors’ problem, or lack of innovation on their part.
Adobe recognizes this — the company is helping Wired rebuild its iPad app to be Flash-free (see Hard Labor: Adobe Rebuilds Its Wired Magazine App to Fit Apple’s Flash-Free Agenda).
Someone who can afford to shell out $75K to develop an iPhone app can probably raise half as much (or more) to develop an Android or other version, if the iPhone app is successful. The rest of us who measure our development efforts with iPhone apps in terms of months of personal work are not even going to consider other versions unless we strike it rich with our iPhone apps. And corporations that want to utilize the iPhone or iPad should consider HTML5 for Web services, rather than native apps.
As for the FTC investigating Apple, take into consideration the following critique (Ignorance and Hubris at the FTC) by an Android developer who was contacted by the FTC for information in relation to blocking Google’s acquisition of AdMob:

There is no way the FTC knows enough to support a decision to block the deal. The staff members we spoke to were not particularly knowledgeable about the mobile ad space they are considering interfering in, or about the technology sector more generally, or about mobile app development and monetization, or about the changes in the mobile advertising sector in the past year, or about the level of competition and pace of change and innovation in the market, however broadly or narrowly you define it.

In short, the FTC could be simply responding to the vicious attacks on Apple. It seems that Apple-bashing has become a fad. Perhaps some see Jobs as the rugged individualist with an attitude, who now deserves comeuppance. They forget how they once cheered him on as he fought against the goliath of Redmond. Many of us who used computers in the 1980s and 1990s greet the rise of Apple’s technology as a welcome alternative to the crusty and unreliable Microsoft-dominated technologies of the past. With an iPhone, iPod touch, or iPad, you hold in your hand an Internet device that is reliable, easier to use, safer, and sexier than any of the devices of the past. Lots of people will buy them in droves (Apple just sold over a million iPads in two months). If Flash won’t work on them, so be it. Technology marches on.
Somewhere buried in all these discussions is the fact that developers can write for the Apple platform and other platforms easily using the WebKit open source browser standard. But if you rely on Flash for some parts of the Web experience you provide your customers — as I do on my Rockument.com site, with some of Amazon’s Flash-based widgets — you have to hope that Flash will be replaced as it loses its dominance by something better (as I hope Amazon will update its widgets).
But I agree with Steve Jobs about Flash. In its SDK, Apple provides much of the actual code for third-party apps to perform magic in the touch environment of the iPhone OS. Why give up control of that layer? Apple would risk having companies like Adobe drag their feet and hijack its plans for systematically updating the iPhone OS development benchmark. Developers would have to wait for the appropriate version of Flash to keep up with new iPhone OS features, and that would slow down the platform’s acceptance — as Microsoft did with its Office suite on the Mac. (For my opinion about cross-platform development, see my previous entry, Apple, Adobe, Twitter: Are We Slapped Yet?).
Anacharsis, one of Greek mythology’s Seven Wise Men, warned people that the market is “the place set apart where men may deceive each other.” I would add the hyperbole, as in the statements of the press and bloggers, is a chief weapon for deception.
Apple rejects apps that call external frameworks or libraries that contain non-Apple code. In addition, you can’t download interpreted code to use in an app except for code that is interpreted and run by Apple’s published APIs and built-in interpreters. Private frameworks and interpreted code may hide functions that Apple would want to know about. Some private frameworks have been found to mine personal information from iPhone users without their knowledge.
And now, another blog asks the question, “Would you sign Apple’s iPhone Developer agreement?” My question to the writer is, do you think developers are idiots?
Note: I decided not to link to the examples of hyperbole in the press and blogs — you can easily find them yourself (you may even have trouble avoiding them), and I don’t want to continue to support this type of journalism by sending them more eyeballs.