I’m writing this as Steve Jobs delivers his keynote address at Macworld Expo (see Gizmodo or Engadget for live coverage).

Apple‘s theme of “Something in the air” is of course based on the Thunderclap Newman song, “Something in the Air” which appeared on the soundtracks of at least two influential 1960s movies, The Strawberry Statement and Easy Rider.

You can find versions on iTunes, such as the Thunderclap Newman original version (from the Easy Rider album), a new version by the band recorded in 2007 with Zoot Money, and the Tom Petty and the Heartbreakers cover version.

The association with revolution is obvious, but Apple’s intent is to showcase wireless technology and its uses in media — particularly Apple TV. Again by making the most of wireless technology, its iTunes store, the iPod connectivity and an eye-popping, simple to use interface, Apple has become the most important challenger to the established video-on-demand players, offering movie rentals through iTunes and directly to your Apple TV. You don’t need to sync with your computer to play what you obtain through Apple TV, but you can sync back to your computer after you’ve purchased something. Very cool. 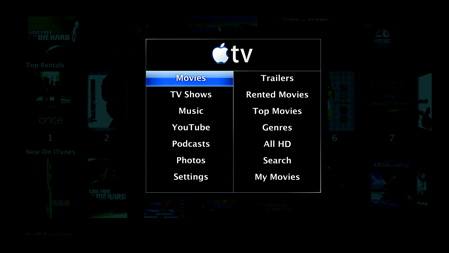 The MacBook Air is, according to Jobs, the world’s thinnest notebook computer. It is extremely thin and lightweight, a major innovation in notebook design (it can fit inside a manila envelope). Besides a full keyboard it also includes built-in multi-touch gesture support with its generous trackpad, supporting all new gestures, and a built-in iSight camera. The optional USB optical drive fits in with Jobs’ vision that these drives will one day be obsolete as we get more of our software, tunes, videos, and movies online. With all these innovations Apple is able to increase battery life to five hours.

This is a full MacBook Pro for $1,799 with the Intel 1.2 GHz Core 2 Duo processor, and since it also runs Windows as well as Leopard (OS X), it is by far the best notebook computer on the market — when it gets on the market (in two weeks, according to Apple). Together with Time Capsule, the wireless backup device that combines AirPort with a large capacity hard drive, Apple is clearly on a roll. I am ready to plunk money down for the MacBook Air and the new Apple TV.