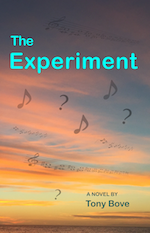 The Experiment, a novel (Rockument)
by Tony Bove

“A deeply provocative alternate look at the 1960s.”

“A fabulously innovative work, both in substance and style… Historical characters and Bove’s own creations drive the novel forward with the gonzo bravado of Dr. Hunter S. Thompson and Norman Mailer… The iBooks edition embeds links to the music that is so important to the story and it’s hard to imagine a better use of e-book technology.”
— Ken Sonenclar, author, Bombs & Believers

“It takes you places and gets you thinking about how music develops and how it gets is passed down from one generation to the next in a way I had never considered before. Clearly a ton of research has gone into this book, and if you’re a fan of the Sixties (the music, the time, the spirit) you will love the thousand nuggets that you’ll happily stumble across as the story unfolds.
— Rodney Osborne, author, Straw Men

Q&A with the author: For an overview, read Q&A with the Author: The Awesome Responsibility of Musicians.

Just Say No to Microsoft (No Starch Press)
by Tony Bove

“More ppl should know about this app! *****”
by Cadeyrn
“Needless to say, it helped me out on a few things, like the battery tips. Before getting this app, my battery would usually run out before the end of the day, and of course that caused some trouble.”

“Should be on everyone’s iPhone *****”
by dbeebe
“Tony’s Tips for iPhone should be the first app a new user installs on their phone. The material is well organized, easy to understand, and very helpful.”

San Francisco Sounds (CD)
by the Flying Other Brothers