Apple’s App Store for the iPhone and iPod touch is vast and brimming with so many interesting apps that it’s hard to get a handle on it all. The price of most commercial apps is so low that the price difference doesn’t matter so much, especially when competing apps are the same or nearly the same price (between $2.99 and $4.99 for most apps; the most expensive in this list is $19.99). It turns out that the time you spend playing with the app is more valuable. You can’t try everything.

So how can you tell if an iPhone or iPod touch app is worth spending time with? Reading the reviews can help, but there is no substitute for hands-on use. Musicians are especially adept at getting their hands onto something and using it. One famous singer and songwriter, Gary Go, will forego musical instruments and perform his show using an iPhone at Wembley Stadium in support of Take That on July 1st, 4th, and 5th. It’s a gutsy move to show that the iPhone or iPod touch is a potent platform for producing music that is capable of entertaining a stadium full of fans.

Let’s start with the simplest tools any musician might need in search of the lost chord. 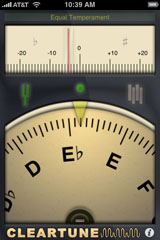 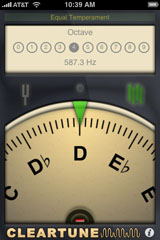 I sing and play harmonica, and never expected to find an app that would be useful for those purposes. But I’m an avid user of Cleartune (not free) — a chromatic instrument tuner and pitch pipe that uses the iPhone built-in mic (or an external mic for an iPod touch 2). I can quickly find the proper pitch for singing. On stage, I’ve used it to quickly show me the root key of a song so that I could grab the right harmonica (which are made in different keys). I also use it to show whether older harmonicas are out of tune and need to be cleaned or adjusted. Others use it to tune acoustic or electric guiltars, bass, bowed strings, woodwinds and brass of all sorts, and any other instrument that can sustain a tone. 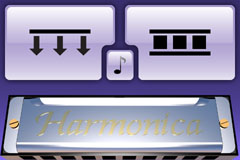 Don’t laugh. I’ve actually used this harmless gimmick to teach the rudiments of playing harmonica. You can either touch the holes to play them, or use your mouth (actually your upper lip), but it’s still a touchy experience — you don’t have to blow or suck air.

What can you say about an app that, within four days of its release, became the No. 1 best-selling app on the store? By far the most famous of strange new iPhone apps that defy characterization, Ocarina — the app that turns your iPhone into an ancient flute-like instrument and lets you share the music you make with others — now works with the iPod touch as well. Without any musical training you can touch the “holes” of the ocarina to make music, or blow into an external microphone. Ardent fans post sheet music showing how they play their songs.

Smule has recently released Leaf Trombone, which offers a similar experience with the sound of a trombone. Leaf Trombone takes it a step further with an American Idol-like competition — you can judge performances on the phone, or just watch others playing popular trombone songs. (Such as? You can start playing “I’ve Been Working on the Railroad” or dozens of other songs in its library.)

If you don’t like the music, go out and make some yourself. You can look for the chord the guitar player is playing in a song, and you can try to play it yourself with PocketGuitar, an app that turns your iPod touch into a virtual guitar. You can press and strum strings with your fingers on the iPod touch screen. 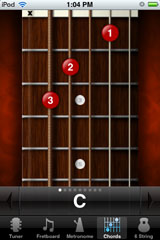 For anyone who plays guitar or wants to play one, you can’t beat the value of GuitarToolkit ($9.99 as of this writing), which provides a chromatic tuner, a chord finder, a metronome, and pitch reference tones. The chord finder lets you quickly cycle through chords and see the fingering for each chord. Slide your fingers across the screen to strum the chord. The scales feature offers a playable fretboard to hear what each note sounds like, and the metronome lets you dial in an exact count in beats per minute (BPM) or tap along to a song to get the tempo.

D’Addario is the legendary string making family that began making instrument strings in Salle, Italy in 1680, and is now a large manufacturer that distributes to over 5,400 retail music stores worldwide. If anyone knows how to search for the lost chord… Chordmaster is a reference library of 7,800 guitar chords. You can hear the chords by strumming with your finger and see them on the fretboard. Scale Wizard, a companion app to Chordmaster, is a scale library that includes over 10,000 modes and arpeggios. You can hear the scales as well as change the playback speed for practicing.

iZotope built its reputation providing technology to top digital audio companies such as Digidesign, Sony, and Adobe. iDrum is a drum machine app that offers a ton of great beats and lets you edit and create your own. Versions of iDrum have been developed for rock, hip-hop, club music, and signature editions for bands such as Ministry of Sound and Depeche Mode (which features content from Sounds of the Universe). 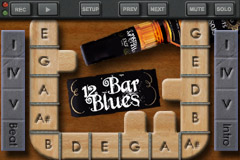 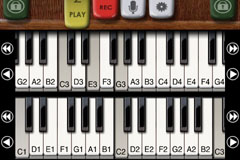 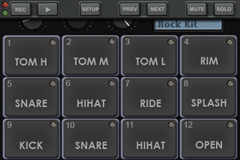 Band is a collection of virtual instruments (drums, piano, bass guitar, blues guitar, and even crowd noise) that are good enough to produce music — for example, the iBand uses these tools in live and studio recording: Marina (on vocals, piano, and guitar) uses the MooCowMusic Pianist and Guitarist on an iPod touch, and Roger plays guitar, bass, and xylophone on MooCowMusic Drummer and Guitarist with custom interfaces and sounds on an iPhone. (Seb, on drums, plays on BeatMaker — see below.)

You can play complex chords in real time, not only hearing the sound but seeing a visual representation of the instrument (piano keys really depress and bass guitar strings really strum). All instruments can be recorded, overdubbed, and mixed together into a song, which can be stored for later playback. Instruments have individual volume and pan settings, and can be muted or soloed during playback. There’s a metronome for keeping time, and, if you make a mistake, you can erase the last few notes, overdub, or instrument, from the mix and record it again.

Inspired by hardware beatboxes, loop samplers and software sequencers, BeatMaker offers 16 multi-touch pads that let you load, slice, tune, and trigger sounds from an extensive sample library. You can arrange song snippets to your liking, loop and improvise in real time with live pattern recording and fingertip sound control — record new sounds wherever you are, and use them instantly in your compositions. The step sequencer makes music composing easy while
keeping precise synchronization, and you can load and save your sound kits and projects. Seb, the drummer in the iBand, uses BeatMaker with a custom soundset on an iPhone.

Musicians often have songwriting ideas at times and places where they can’t write them down. Although it will never replace your main recording setup, FourTrack mixes and plays up to four tracks like a pocket-sized version of Pro Tools. Recording in true 16-bit, 44.1 kHz quality, FourTrack works with the iPhone headset mic, or an iPod touch with an external mic. You can record up to the capacity of your iPhone or iPod touch, and then use Wi-Fi Sync to transfer your recordings to nearly any desktop computer, where tracks can then be imported into whatever recording software you use.

Audiofile Engineering has a good reputation built with AE make Wave Editor, which has rapidly become popular for Mac audio producers and sound designers. This app is a high-quality recorder likely to be useful for recording song ideas, rehearsals, and even concerts — you can use Blue Mikey, Alesis ProTrack or even the internal mic. It offers waveform display, overdub mode for sketching out song ideas, markers with location data, great VU meters for input and output, and support for uploading audio to the Internet using SoundCloud.

Professional musicians are getting in the act of discovering there’s an app for that. By the time you read this, there will be hundreds more.