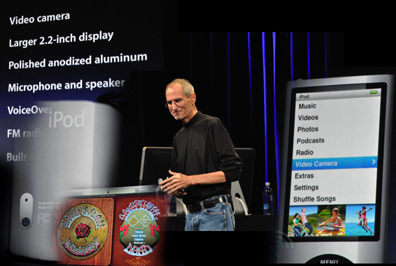 Today’s “It’s Only Rock and Roll” press event held by Apple (best of the live coverage here) held no real surprises other than the triumphant return of Steve Jobs to the stage. Rumors and insider reports had already clued us into the album-package feature of the iTunes Store, better apps management in iTunes 9, and the video camera for the iPod nano. What’s missing are the video camera for the iPod touch, and Blu-Ray support for iTunes. And, of course, the Beatles.

The iTunes Store has been redesigned to be more airy, less cluttered, and more social. Arrows next to “buy” lets you automatically gift music or add to a wish list, and send directly to Facebook or Twitter. And with the iTunes LP package for albums, including videos, liner notes, credits, and other customized content that you used to get when you bought LPs in the past. This is great news for us baby boomers who still love classic rock; it may not be so impressive for the younger generations that are plugged into current bands and their Facebook/MySpace/Twitter streams. One wonders whether the established music industry is simply trying to find another way to revitalize itself, using once again classic rock. After the baby boomers stop buying the same music again, this strategy may turn out to be hopeless — for the record companies. But not for Apple, which reaps the short-term rewards of selling the music.

iTunes 9 includes some new music syncing features to make it easier to be picky about what you sync. And the long-awaited app browsing and syncing features are finally on board. You can use iTunes to arrange your iPhone or iPod touch Home screens and move apps around — on the left you can see all the apps in the library, and on the right, rearrange the Home screens. Apple also added the Genius feature to the iPod touch and iPhone (via iPhone OS 3.1 software, available free), and to iTunes, so that the store makes recommendations to you based on what you own. The new Home Sharing feature lets you copy songs, TV shows, movies, and so on, to up to five computers “in your house” (presumably, your local-area network). You cab see all the computers you can share with, and see the content, and also drag the content to copy it to your library. That’s better than streaming the content.

After a bit of promotion about how well the iPod is doing as a family of products (over 220 million sold, with a market share of 73.8 percent), we learned that more than 50 percent of buyers are new to the iPod. That’s great for writers of how-to books on the iPod (like me, with my iPod & iTunes For Dummies

and iPod touch For Dummies

The iPod touch is getting faster (with Open GL for graphics), there are 21,178 entertainment titles in the App Store, and Apple is lowering its price and boosting its memory — 8GB for $199, 32GB for $299, and 64GB for $399. But no camera yet. The iPod touch will most likely be updated or subsumed into a new tablet version when the latter is introduced.

The iPod nano, however, is ready for prime time, sporting a video camera on the back (available today, just ordered it online as I write this). The iPod nano comes in many colors, 8GB for $149, 16GB for $179. The camera captures H.264 VGA video, 640 by 480 pixels, up to 30 frames per second with AAC audio. You can watch the video on your iPod nano, sync the video to your computer, and with one click, send it to YouTube. The camera offers 15 real-time special effects such as Sepia, Black and White, X-Ray, Film Grain, and Twirl. The iPod nano also offers an FM tuner with two excellent features: iTunes Tagging and Live Pause.

So, all in all, it’s only tunes and videos this time, but I like it. Still, I miss the Beatles, and I hope the iTunes LP is put to good use on their albums.