Steve Jobs said in his keynote on Jan. 26 that the newly announced iPad is “our most advanced technology in a magical and revolutionary device at an unbelievable price.” 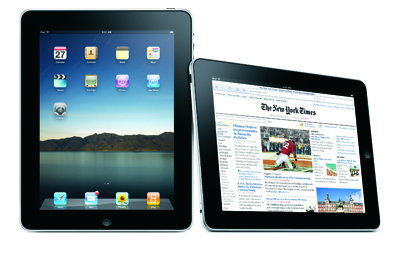 I agree mostly with Daring Fireball’s “iPad Big Picture” that Apple is “taking over the penthouse suite as the strongest and best company in the whole ones-and-zeroes racket.” While the iPad’s first instance is not its best, the device marks an entirely new territory.

It’s a big deal, more than just a big iPod touch. People will be able to enjoy content on the Internet away from their desks — on living room couches, in coffee shops, on the train, etc. — and more easily share it with others, far more than they do now with the iPhone or iPod touch. The form factor, portability, swift performance and software experience changes the game with all devices that access the Internet. In particular, the iPad is a fantastic social media device — easy to organize and share photos, easy to type messages quickly, easy to grab links from Web pages to include in your posts, and so Â on.

Steve Jobs said it best at the event: “It’s the best [Web] browsing experience you’ve ever had. A whole Web page right in front of you that you can manipulate with your fingers. Way better than a laptop.”

And Michael Swaine, the editor of PragPub, emailed me with a perspective that I completely agree with. “The actual presentation was utterly routine. Here’s a Web page. Here’s another. Look at this email page. etc. But the whole point of having the couch on stage was, don’t focus on the screen, focus on the user. In this case, Steve Jobs. Look how comfortable he is, how easy it all is. Jobs was offering a subtle message for those who could pick up on it: focus on the user’s experience. It’s what Apple always does. It’s what makes them great.”

The iPad makes the Internet more useful as a publishing medium. It actually extends the reach of Internet content by making Web pages more available in places you never used the Web before, from the kitchen table or living room, to walking down a street. (One could argue that the iPhone does this — I certainly use it that way — but Web pages are still difficult to use and interact with on an iPhone or iPod touch due to the smaller display.)

The iPad — iPhone — iPod touch — App Store ecosystem also changes the game for software, especially for productivity and Office-like applications, which are now one-tenth the price (the Keynote app for the iPad, for example, is $10, while PowerPoint is about $100). Opportunities are wide open for inventions that build on all the strengths of iPhone apps and take advantage of the larger display. Games are huge — this is the perfect game machine. Content becomes more important as a differentiator.

Does the iPad kill the Kindle? I think it marginalizes Kindle and other devices that don’t offer multiple types of content — which appeal only to smaller, segmented markets. But Amazon, which separated its hardware division from book sales, understands the book market and offers an excellent recommendation system, and could easily sell more books on the iPad (with a Kindle app) than Apple will through its new iBook Store.

Books will sell well (though not better than paper editions). On the other hand, if textbooks drop in price drastically, sales could outstrip paper versions. Newspapers may come back to life if they can take some market share back from Google, craigslist and eBay — or find ways to monetize connections with these services. Streaming TV shows and live broadcasts will be more ubiquitous. And yes, most of this is due to the mobile device explosion, but the iPad will kick this into overdrive.

The biggest shortcomings of the current iPad is the lack of multitasking, but I assume this is temporary, and you’ll be able to run several iPhone-sized apps at the same time on the iPad display. I would like to see video conferencing and video chat (so would everyone), but it is not a deal breaker — I already carry a camera and video camera in my iPhone. The lack of GPS is probably temporary also, and compensated for with the same location services as an iPod touch (through Wi-Fi). I expect all these shortcomings to be fixed before 2011.

The current iPad’s biggest strength is its speed. The iPad is screamingly fast for Web browsing. The Apple-designed custom processor, A4, is a System-on-a-Chip, or SOC. This is one of main reasons why iPad can deliver a lively Internet experience. The A4 is also good at managing power. But the real advantage is, of course, the iPhone operating system and the App Store and iTunes ecosystem.

Apple’s magic carpet ride takes off with 125 million credit card accounts in the iTunes Store and App Store, and 75 million people who already know how to use it before they even get it.

Will I buy one? No question about it, I’ll be standing in line for it. It’s my next laptop. I can take care of all my computing needs with one desktop system at home (that’s always on and connected, and with all the trimmings to create multimedia content), and my iPad and iPhone on the road.

For people who use a single laptop with a DVD drive, the iPad won’t be attractive yet. But as laptops are far more fragile and prone to mechanical failures, and become obsolete in about three years, people will come around to this type of device. By then, the software world will have changed to support more low-cost apps, more videos will stream from the Internet, and you won’t care about having a DVD drive on the road anyway — you’ll want an iPad or something like it.